This story is by far my most memorable and endearing. At the time I originally wrote this, a close friend of mine, Sam, lost his father. This isn’t really unusual. I’ve had many friends lose family members to the other side, and in rare instances am I able to make contact, and at the time only after several months or years have passed.

Around 7:15 p.m. that evening I was lying on my bed, unwinding from the day and contemplating the many thoughts circling inside my head. Suddenly, I felt a presence in my room. This is normal for me, especially in my line of work. But, what made it unique was that this presence approached me from behind and placed a gentle hand on my right shoulder. I felt that he wanted to talk, but did not want to startle me. I felt warmth, care, compassion and concern for my mental state at being touched by an unseen person in my bedroom.

I could tell his hands had been worn, perhaps from farming. They were large, wide, and had a gentle firmness about them.

I quickly began receiving impressions, feelings, and pictures in my mind, as is typical with most spirits who come to me. What made this one different was how very clearly he communicated. I made mental notes and stored them away until I could talk to Sam and see if this spirit’s characteristics described his father. I had never met him, never seen his picture, and never heard Sam mention him. Ever. Until the morning I was told he was dying.

It was getting late and Sam was most assuredly busy processing the emotions of the significant loss to him and his family. So, I reached out to another close friend, Kat, who was more familiar with his family than I was, to validate some of the information I had received.

I shared with Kat that I believed this gentle spirit had been a farmer or worked with his hands in some capacity. He appeared to me to be a tall man with a larger build, and was more or less a gentle giant. She was able to confirm I was on the right track. And our work would begin.

I gently let Sam know that felt I was in contact with his father and explained how he had introduced himself to me. I told Sam I would be available to him if he had any questions. But he had a funeral to plan and family to appease. So, Mr. Gentle Man and I would patiently wait to begin our adventure. In the meantime, he was perfectly comfortable hanging around with me until his son eventually reached out with questions.

A few days later his text came. “Does he have anything he wants me to know?” I felt the trepidation in his question, and the harried emotions from the recent couple of days. But there were things Mr. Gentle Man wanted his son to know.

First and foremost he wanted his family to know that he was fine and it was beautiful where he was. He seemed oblivious to the chaos he had left behind in his passing, and felt almost jovial. He showed me mental pictures of his daughters, or “hens” as he referred to them, all bombarding their brother with how-tos, what-fors and everything else he needed to do to prepare for the funeral. I’m sure it was overwhelming. And he had a word for me and for Kat: “Take care of my boy.”

While waiting for Sam to formulate his questions, Kat fed me information on Sam’s dad. His name was Ron. He was a flower farmer and a Master Beekeeper. This so eloquently explained his gentle nature, his “farmer’s hands,” as well as his ability to communicate so well. To be a beekeeper, you have to understand the bees. You need to be able to trust them and them you. There was a mutual respect between Ron and his bees. I felt it. This communion with nature taught him how to communicate with his spirit instead of his words. Which was, I believe, how he became so good at talking to my soul that night.

A bit later, Sam asked me if I would help locate his father’s “stashes,” which were hidden all over his property. So, I asked Ron. What could it hurt? Ron agreed, but he had one stipulation – if I told Sam where to find the stashes, Sam had to promise to keep them for himself. After all, Sam was doing all the work to find them, and Ron believed in reaping the rewards of hard work and living up to one’s God-given potential, something that Sam verified for me with much enthusiasm. This was why I think he chose me to be his medium.

You see, I was at a critical crossroads. I was just a thought away from turning my back on my abilities and living a “normal” life. I was about to squander my gifts away and not live up to my full potential. Ron, being aware as he put it, couldn’t stand by and let that happen. So, he hired me to help Sam find his stash.

Ron told me there were four treasures in total. But he only showed me three locations. I later learned that Sam had found one and had already shared it with his sisters. The other three (as I saw them) were located; 1) In a work shed of some sort, beneath a wooden work bench; 2) Inside a honey shed, near where he worked with his bees, beneath a counter top – he called this one his “Honey Money”; and 3) In the attic inside a can or old cleaner container.

Sam located two of the three: One in the box beneath the work bench, and the other, the “Honey Money,” (photo of the actual bag below) was found. He is still looking for the stash in the attic.

As often as I get great validation of my work, I was still blown away. This was awesome and amazing and all the other exciting words you could pour into this sentence to express how thrilling a ride this was.

Shortly after that, Ron’s presence faded and sadness filled the void. During the previous days while we were working together, he was amused as I sang along with the songs playing on the radio during the daily rides home from work. He shared images of his life and his family, and he gave me tidbits of what it’s like on the other side. We had become close, and now my life was returning to normal. I wept. But he came and did what he intended to do. He helped his son, and he saved me from making a devastating decision, as he reminded me of the hundreds of people who have been helped during my years of doing what I do.

There is so much more to Ron’s story, but there was one important lesson I learned in all this and what I want to share it with you: Never, ever give up on yourself no matter how awful you think your life is turning out. There is an end to the darkness and there will always be someone there holding a Light to help lead you out. Mr. Ron was my Light. This life-saving experience allowed me to work with him and Sam, to share some fond memories, to get a glimpse of life on the other side, and to laugh.

I was honored to be his voice, his tool and his hand. I was and forever will be The Hand of The Beekeeper. 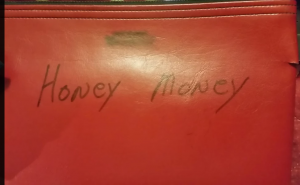 Welcome to your NEW Newsletter! This is where you will be informed of upcoming events, specials and Question of the Month contests. I look very forward to launching this new venture with you! Lori